Young Architects Forum and the College of Fellows

Brought to you by the Christopher Kelley Leadership Development Program 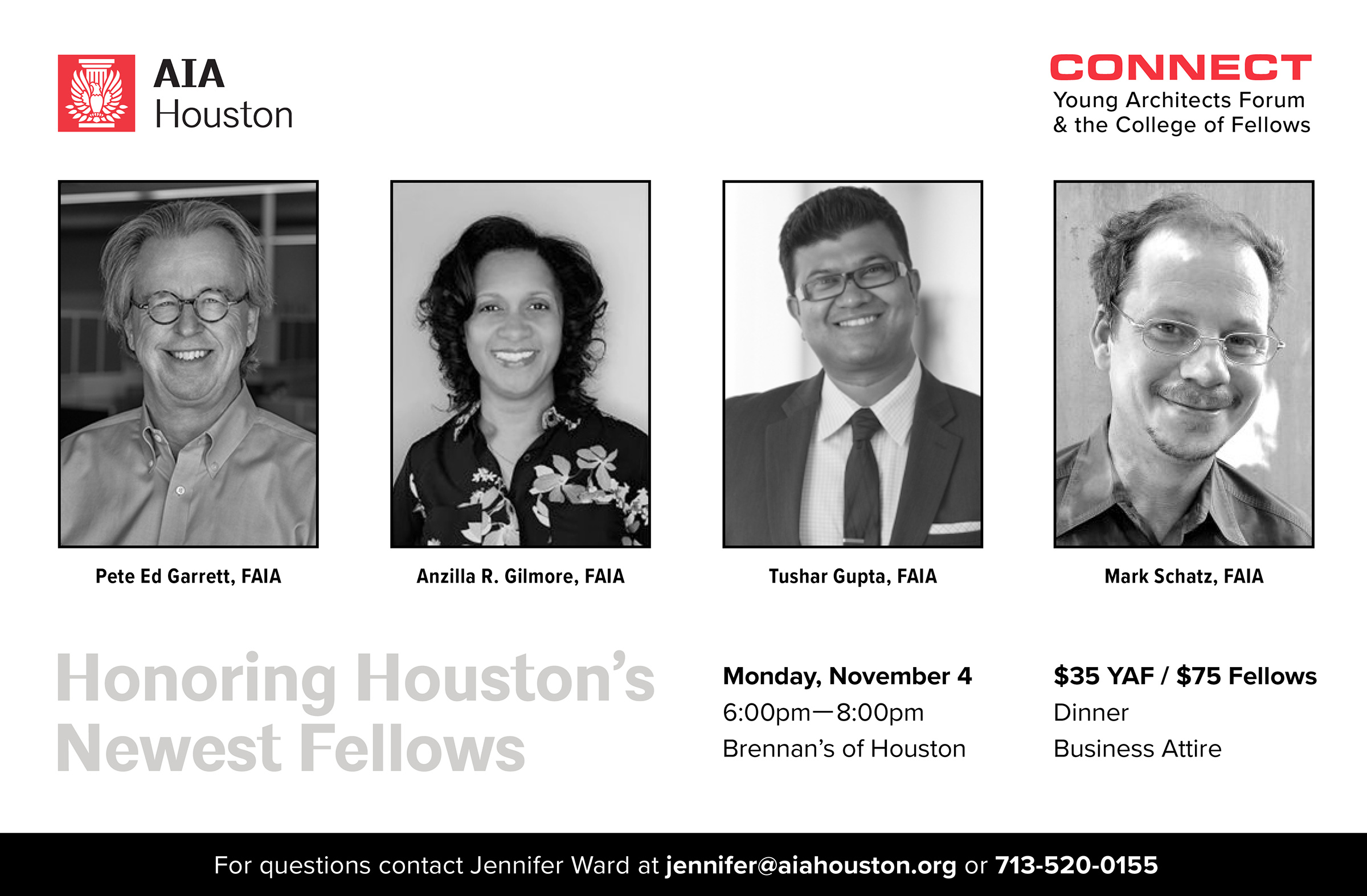 Please join the AIA Houston Young Architect’s Forum for an evening of celebration, conversation, and mentorship honoring Houston’s newest 2019 Fellows.  Through connecting young architects within the first 10 years of licensure and esteemed members of the College of Fellows, this seated dinner nurtures intergenerational conversations between the leaders of today and the leaders of tomorrow.

A partner at Studio RED Architects, Pete Ed Garrett has devoted the past 40 years to developing technical innovations for performing arts and assembly spaces. Garrett began his career in the early 1980s, a pivotal time for theater design, and he quickly became a go-to assembly expert nationally. He designed the first IMAX 3D Theatre in the U.S. and the Terminator 2: 3D at Universal Studios Theme Park. He also led the design team that converted a basketball arena into Houston’s Lakewood megachurch, and the award-winning renovation of the Alley Theatre.

Anzilla Gilmore is profoundly changing the face of the profession by improving how minorities engage the discipline. Her involvement in NOMA at the national level greatly invigorated the organization, with membership doubling in only two years while she was serving as the national membership chair. Gilmore is also recognized for founding the Houston chapter of NOMA, rebuilding and dramatically expanding the Architects Foundation national scholarship programs, and establishing the foundation’s Diversity Scholars Mentorship Program. She is the first female African American registered architect in Houston and is the assistant director for project management and engineering at Rice University. Gilmore currently serves as the chair of the AIA National Ethics Council.

Tushar Gupta is a design principal with EYP and managing principal of the firm’s Houston office. He is also president of the AIA Academy of Architecture for Health. Gupta has dedicated his career to creating a new generation of health facilities that focus on promoting well-being for patients, comforting spaces for families, and supportive workplaces for caregivers. His projects, such as the Jersey Shore University Medical Center Transformation, have garnered international honors and landed him on both the Building Design+Construction magazine and Houston Business Journal’s 40 Under 40 lists (in 2011 and 2012, respectively).

Mark Schatz leads m + a architecture studio, an award-winning design-build firm producing uncompromising yet broadly accessible work. Schatz’s process-based and exploratory design solutions range from furniture and domestic-scale projects to small commercial buildings and interiors. This model has allowed m + a to bypass the inertia of the typical construction process, letting Schatz serve a broader client base with ongoing experimentation and design development. Schatz says that in reflecting on his practice, the following quote by Neko Case comes to mind: “I really love the Eiffel Tower, but I have popsicle sticks, so I have to make my Eiffel Tower out of popsicle sticks rather than steel, but I’m still going to make an Eiffel Tower.”