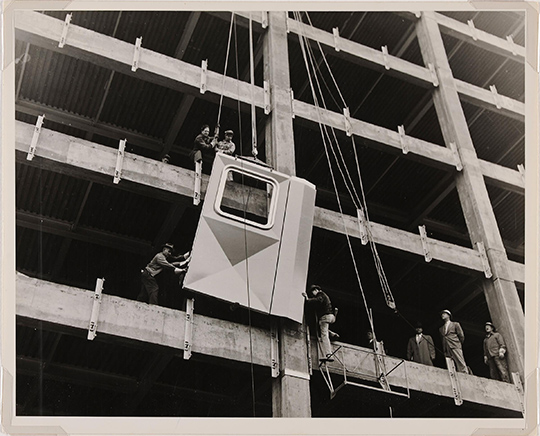 Pre-registration has been closed, but walk-ins can purchase a ticket at the event.

Program: This talk compares two cases of research, advocacy, and preservation of modern built heritage in U.S. cities, drawing on our recent books Heroic: Concrete Architecture and the New Boston (2015) and Imagining the Modern: Architecture and Urbanism of the Pittsburgh Renaissance (2019). In Boston, the concrete buildings that transformed the city during the 1960s and 1970s were conceived with progressive-minded intentions by some of the world’s most influential designers, including Marcel Breuer, Le Corbusier, I. M. Pei, Henry Cobb, Araldo Cossutta, Gerhard Kallmann and Michael McKinnell, Paul Rudolph, Josep Lluís Sert, and The Architects Collaborative. In the same period, an ambitious program of urban revitalization transformed Pittsburgh and served as a model for the postwar renewal of other U.S. cities. Billed as the Pittsburgh Renaissance, this era of superlatives—the world’s first aluminum-clad building, the largest retractable dome, the tallest exposed steel structure—brought together powerful urban planning authorities, visionary mayors and business leaders, and architects and designers of international renown to address the social, economic, and environmental problems that confronted the postwar city. Today, when urban renewal-era buildings across the nation are under threat of demolition or insensitive renovation, these research efforts survey the intentions and aspirations of the period, explores what was built (and what was imagined), and asks what these histories might suggest for the future of U.S. cities.

Bio: Michael Kubo is Assistant Professor and Program Coordinator for Architectural History and Theory at the Gerald D. Hines College of Architecture and Design, University of Houston. He was previously the Wyeth Fellow at the Center For Advanced Study in the Visual Arts, National Gallery of Art in Washington, D.C. and associate curator for OfficeUS, the U.S. Pavilion at the 2014 International Architecture Biennale in Venice, Italy. His recent publications on the history and preservation of twentieth-century architecture and urbanism include Heroic: Concrete Architecture and the New Boston (2015), OfficeUS Atlas (2015), and the forthcoming Imagining the Modern: Architecture and Urbanism in the Pittsburgh Renaissance (2019). He is currently preparing a book on The Architects Collaborative and the authorship of the architectural corporation after 1945.

Kubo holds a Ph.D. in the History, Theory, and Criticism of Architecture from the Massachusetts Institute of Technology and an M.Arch from the Harvard Graduate School of Design. His writing has appeared in publications including the Journal of the Society of Architectural Historians, Journal of Architectural Education, Harvard Design Magazine, Bauhaus Magazine, Architects Newspaper, PRAXIS, MAS Context, CLOG, and Volume. Prior to joining the University of Houston, Kubo taught studios and seminars at Pratt Institute, the University of Texas at Austin, and SUNY Buffalo, where he was the Peter Reyner Banham Fellow for 2008–09.