Hosted by the Kinder Institute for Urban Research.

This event is free and open to the public, but space is limited. Please RSVP by following the link below.
Download To Calendar
September 22, 2015
6:30 PM
Centerpoint Energy Tower
1111 Louisiana
Houston, TX 77002
arch@aiahouston.org

Brought to you by the Urban Design Committee 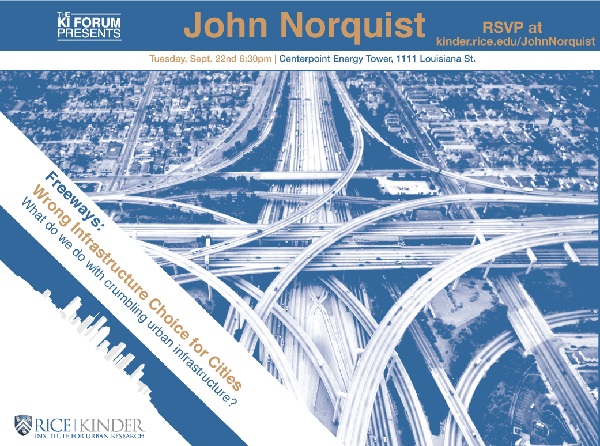 John Norquist served as Mayor of Milwaukee from 1988-2004. Under his leadership, Milwaukee experienced a decline in poverty, saw a boom in new downtown housing, and became a leading center of education and welfare reform. He oversaw a revision of the city's zoning code and reoriented development around walkable streets and public amenities such as the city's 3.1-mile Riverwalk. Named a Governing Magazine Public Official of the Year during his tenure, Norquist also received widespread recognition for championing the removal of a .8-mile stretch of elevated freeway. In 2008, he received the prestigious Bacon Prize from the Philadelphia Center for Architecture.

Norquist is the author of The Wealth of Cities: Revitalizing the Centers of City Life. The book argues that cities have natural advantages that have been undermined by a half-century of ill-conceived housing, education, transportation, crime, welfare, and environmental policies.

After his mayorship, Norquist took the helm of the Congress for the New Urbanism, the leading organization promoting walkable, mixed-use neighborhood development, sustainable communities and healthier living conditions. He spoke often and eloquently about the regulatory obstacles that continue to get in the way of good urbanism. Building on his experience taking down the Park East Freeway in Milwaukee, he championed a national CNU campaign that has helped advocates and local officials in their own highway teardown movements. Norquist led CNU from 2004 to 2014.